The History of Mountain Faith Mission in Saut d’Eau

This is being written from the memory of a girl who was 13 years old in 1947.

I begin by bringing in a history of a Haitian man who came to see my father, Rev. Lee R. Carroll, when we lived about 4 miles from Cap Haitien, Haiti. Daddy was working under Rev. G.T. Bustin to fix up buildings on a property that Bro. Bustin had bought to start doing missionary work. This man’s name that visited was “Butler.” 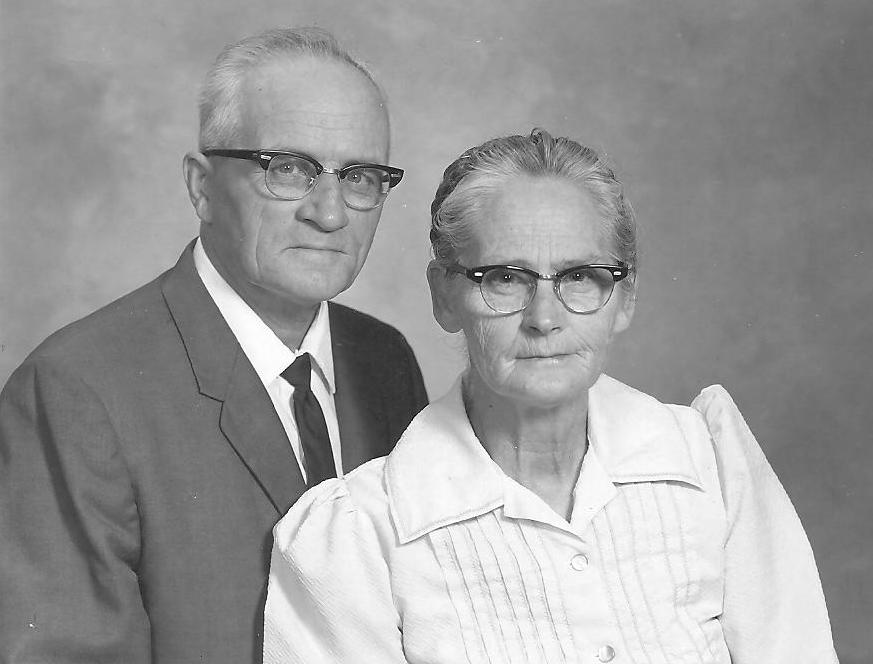 Pastor Carroll and his wife, Molly

Butler seemed to be a very pious, soft spoken man and he named a missionary that he had been working with. He brought a French poodle and wanted to sell it for $4.00. Mama and Daddy had never bought a dog, but knowing that Paul and I had little else, gave in and bought “Mickey” for us.

Daddy wanted to make sure that this man was sincere, (although he acted like he was) but just to make sure, Daddy sent a letter to this missionary and the missionary did not even wait to write a letter (and telegrams were not popular in those days as they cost money). Instead, he sent a telegram to Daddy with these two words on it: “Butler Volere” which means “Butler theif.” So Daddy dismissed him and later he was seen following police, handcuffed, walking on the road toward town. This happened in 1945.

In 1946, we moved to Petionville, Haiti, which is just above Port-au-Prince, for one year. We had not seen Butler for quite a long time, but he showed up wanting to work with us again and apparently had repented. We were living in a 3 room house, so space was very limited since we had the four of us, plus a teacher for Paul and I. We kept our school desks outside on the open porch and they had our school supplies in them. One morning, Mama, who was an early riser went out on the porch to find, in the fairly dark morning, a thief bent over one of the desks, and of course he quickly fled when Mama came out. I well remember what Mama said to us : “It looked like Butler,” but she wasn’t able to make sure it was him.

Butler had been to Saut d’Eau, he told us, and he wanted Daddy to go up there and investigate the possibility of starting a mission work up there. At the time, Daddy had been trying to find where the Lord wanted him to go. He had even been down to the tip of Haiti in the southeastern area to see if that might be where we were supposed to go.

Daddy took Butler and they went up to Saut d’Eau. I remember how the little children would run like little scared rabbit when we went by their homes, We found out that they had been told that the white people would eat them.  Well, in time, we overcame that reputation!

Daddy decided that this was the place that God wanted him to go to. I can’t remember all the details of buying the property, but the family he bought from was a very large family and every heir has to sign to sell a property. Well, Daddy thought they all had signed and one day, we heard that the word was going around that there was one heir that had not signed and we were going to lose the property. At that time we were in the middle of building the main Mission Home. I remember how alarmed we were. Daddy went right down town to see about it and found out that everyone had signed that was supposed to.

Daddy and Mama rented a building in down town Saut d’Eau and we would go up to Saut d’Eau for services. One trip, the natives started asking us ‘Where’s the soap?’ Thus, we found out that our thief had caught up with us again. They told us that Butler had taken up money from people and told them that Pastor Carroll would bring the soap when he came up. Daddy didn’t know anything about it.

At this time in Haiti, soap was very hard to get so I guess it wasn’t too hard to promise people that the missionary would bring them soap if they paid for it in advance!

Well, this landed Butler in prison. In the meantime, Daddy and Mama rented a Haitian house in downtown Saut d’Eau which they felt would work for us to live in until a house could be built on the property that Daddy had bought. There were no buildings on the property — just land. This house had a cement floor in the front room and the other two rooms were dirt floors. Cooking was done outside on little charcoal stoves. There was an attic that was suitable to sleep in which you had to climb a ladder of some sort to get up there.

There came the day when in a town far away, they had Butler’s trial and Mama and Daddy had to go to it. There was not much food in the house, but we did have beans and I don’t remember what else. What I do remember is that we, nor Daddy and Mama, knew how long they would have to be gone, so Paul and I cooked beans and we decided we could add lots of water and make the beans last longer! Ha! It turned out that God was good to us and Mama and Daddy got to come home soon. I don’t remember if it was the same day or if it was the day after, but it worked out alright and we didn’t go without food!

Happy was the day when we left our little Haitian house to move up to a three room part of the main house where we could be more free and alone! It did not have connecting doors, so we would have to go out one door and into another door to get to another room. It took quite a while for the main part of the Mission House to be completed so that we could move into it and enjoy all the space. 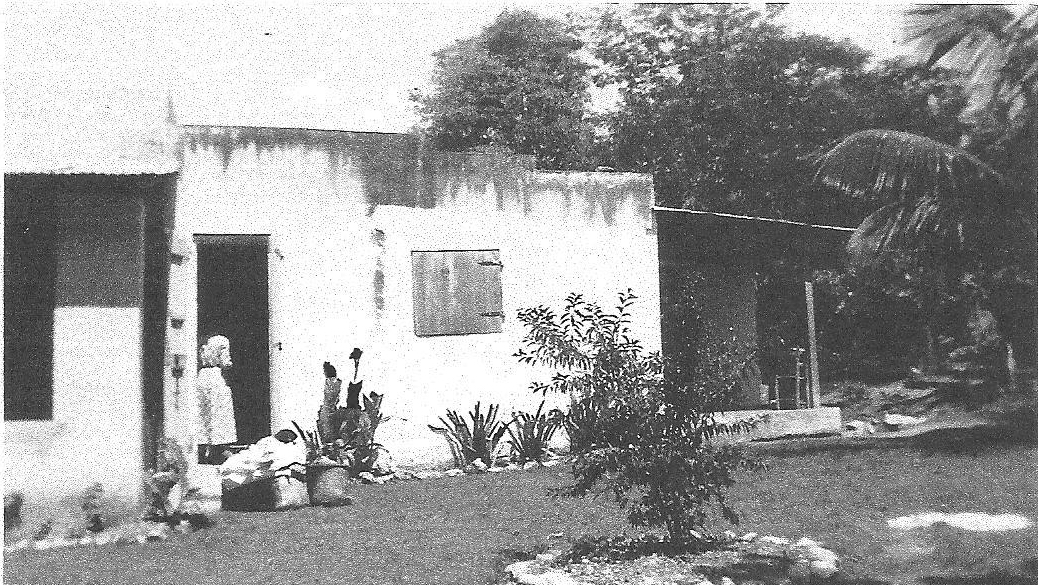 I remember Daddy telling this experience that he had after we moved up to the property. He said it was like the devil came in and sat down and said, “You’re a fool to bring your family up here like this!” He said the devil kept telling him what could happen to his family and other things, but Daddy gained the victory over the devil!

Daddy and Mama faced many trials and tests. I remember how shocked I was to walk over across our little stream behind the house to discover that we had built almost on the edge of a cliff that was straight down! The drop very far down at that and there was a stream of water not far from it! I didn’t  know  if the  bank would  give way  and we would go down into that awful deep placeI! But that has been many years now and the Mission home is intact, thank the Lord! Many were the hours that Daddy spent building the original buildings. He brought in a mason from the north of Haiti to do mason work. Then we had a local man by the name of Innocent that did a lot. I think the original mason probably taught him how to do it. Daddy paid the natives so much a load for bringing in rocks carried in saddle bags on donkeys and horses, for building. The natives liked that because it gave them some income.

Many experiences I could write about, but I want to say, GOD WORKS IN MYSTERIOUS WAYS His wonders to perform. Who would ever think that god would use a thief to start a GREAT work for Him in Saut d’Eau, Haiti! If it had not been for Butler, Daddy would not have known about Saut d’Eau!

I might add here Butler visited us after he got out of jail before the Mission Home was done and my dear little Mickey must have gotten stolen since she came up missing right after his visit. She was probably stolen before I got her and now stolen again. I never saw her again. Someone said they saw a man carrying a little white dog and they said:’that looks like Pastor Carroll’s dog’ and no doubt it was, so guess she went probably to Port-au-Prince. I hope whoever got her, fed her better than most dogs get fed in Haiti.

Daddy and mama started very small, with a few faithful, and sometimes unfaithful people, coming to hear the gospel. Our first place of worship was what we call a toenail in Haiti. It is a little shelter built of poles and covered with palm leaves. Beneath it, you put benches to sit on. I have a picture of our little group of believers, which after seeing what God and HIs Workers have accomplished since then, and the large group of Christians now makes my heart rejoice! I am so thankful that God has truly turned the devil’s foot stool into a place that honors God! Thanks and much appreciation goes to our dear missionaries, Pastor and Madame Turner, and to all the precious team members who have helped make God’s work what it is today!